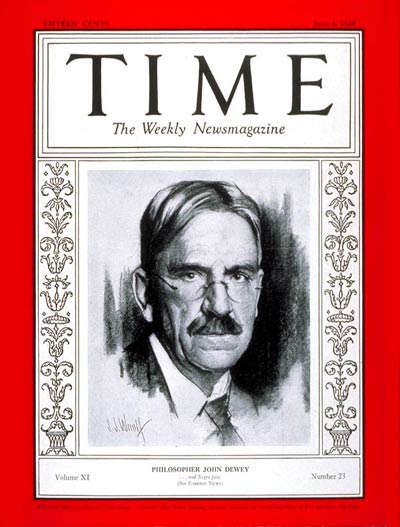 The John Dewey Society grew out of series of discussions held in 1934 and early 1935 among 60 or so liberal educators who wanted to found a society to “encourage in every way possible and itself conduct scholarly and scientific investigations of the relations of school and society, with particular reference to the place and function of education in the process of social change.” (A list of the founding members is included in Tanner’s Crusade for Democracy.) Originally called “The Association for the Study of Education in its Social Aspects,” the name was changed to the John Dewey Society in early 1936.

In the February 1936 issue of The Social Frontier, the name choice was explained:

The new society was named for John Dewey, not because the founders wished to devote themselves to an exposition of the teachings of America’s greatest educator and thinker, but rather because they felt that in his life and work he represents the soundest and most hopeful approach to the study of the problems of education. For more than a generation he has proclaimed the social nature of the educative process and emphasized the close interdependence of school and society. Presumably, without being bound by his philosophy, the John Dewey Society will work out of the tradition which John Dewey has done more than any other person to create. Such an organization is badly needed in America today.

The first annual meeting (held in St. Louis on February 23, 1936) focused on the topic “Teachers’ Loyalty Oaths — Fascism?” Beginning in 1941, the Society held its annual meeting together with the annual meetings of the Progressive Education Association (in Philadelphia) and the American Association of School Administrators (in Atlantic City). The School Administrator’s group found the Society’s meetings too controversial, and so for several years the Society met on its own, until the mid-1950s when it began to meet with the annual mid-winter meeting of the American Association of Colleges for Teacher Education (AACTE) in Chicago.

Other than annual meetings, the primary activity of the Society during its first three decades was publication of a series of Yearbooks. Sixteen yearbooks were published during the period 1937 to 1962.

Note: For a more complete history of the Society, see Daniel Tanner’s Crusade for Democracy: Progressive Education at the Crossroads (SUNY Press: Albany; 1991).