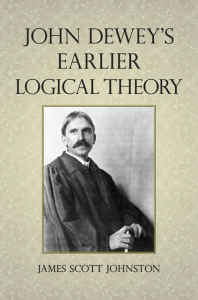 The John Dewey Society is pleased to announce a new book by one of its members titled, Dewey’s Earlier Logical Inquiry. This book provides an analysis of Dewey’s pre-1916 work on logic and its relationship to his better-known work from 1938.