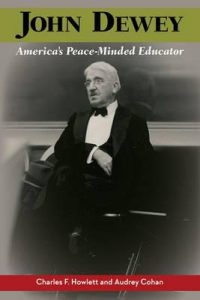 In John Dewey, America’s Peace-Minded Educator, authors Charles F. Howlett and Audrey Cohan take a close look at John Dewey’s many undertakings on behalf of world peace. This volume covers Dewey’s support of, and subsequent disillusionment with, the First World War as well as his postwar involvement in trying to prevent another world war. Other topics include his interest in peace movements in education, his condemnation of American military intervention in Latin America and of armaments and munitions makers during the Great Depression, his defense of civil liberties during World War II, and his cautions at the start of the atomic age. The concluding epilogue discusses how Dewey fell out of favor with some academics and social critics in the 1950s and explores how Dewey’s ideas can still be useful to peace education today.

Exploring Dewey’s use of pragmatic philosophy to build a consensus for world peace, Howlett and Cohan illuminate a previously neglected aspect of his contributions to American political and social thought and remind us of the importance of creating a culture of peace through educational awareness.